Landscaping, tiles: The full scope of original design by the artist included a spatial area beyond the parabolic that incorporated an arch pollinator garden and surrounding space, which was later further improved upon by 2 phases of landscape designers., 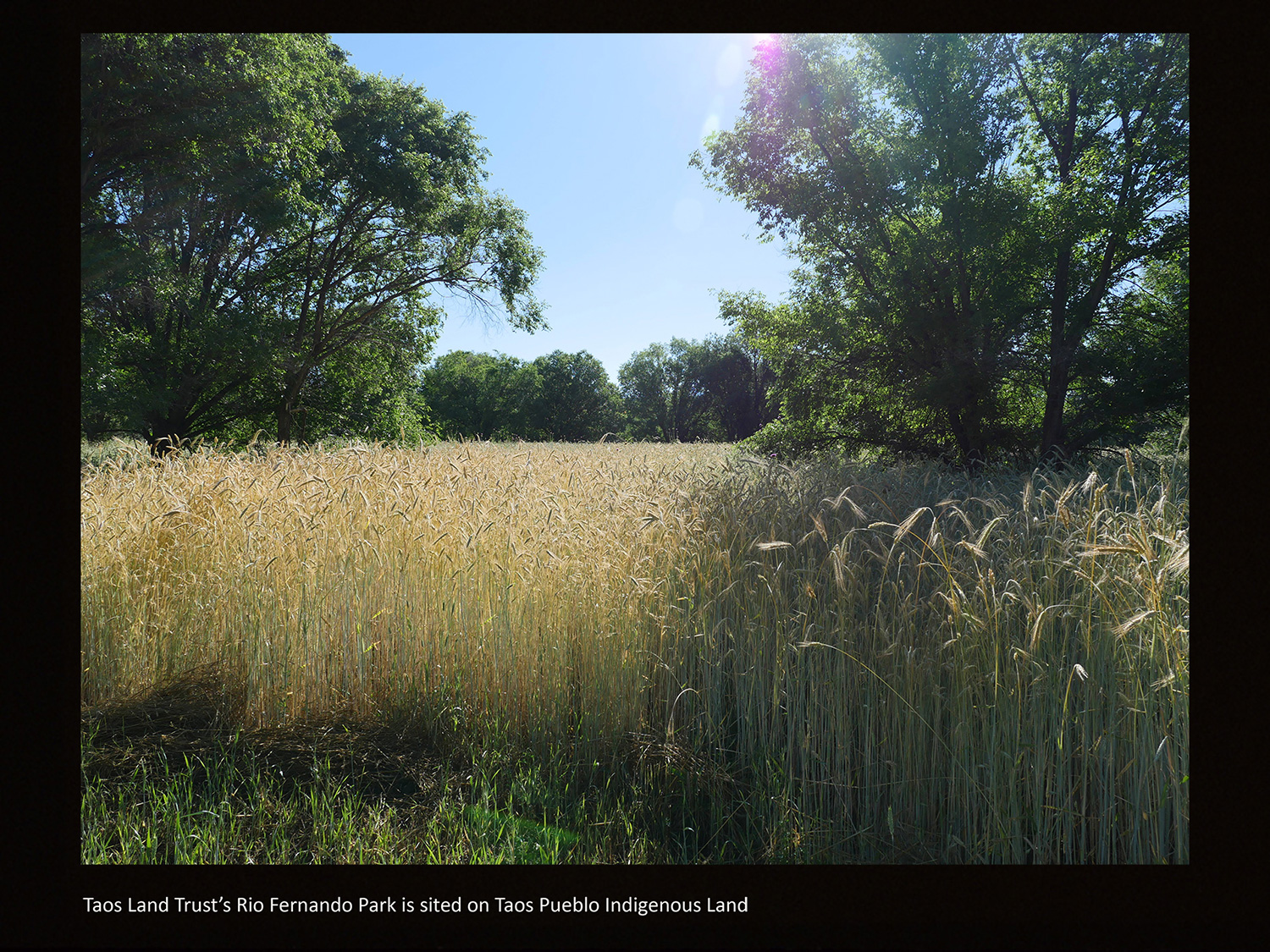 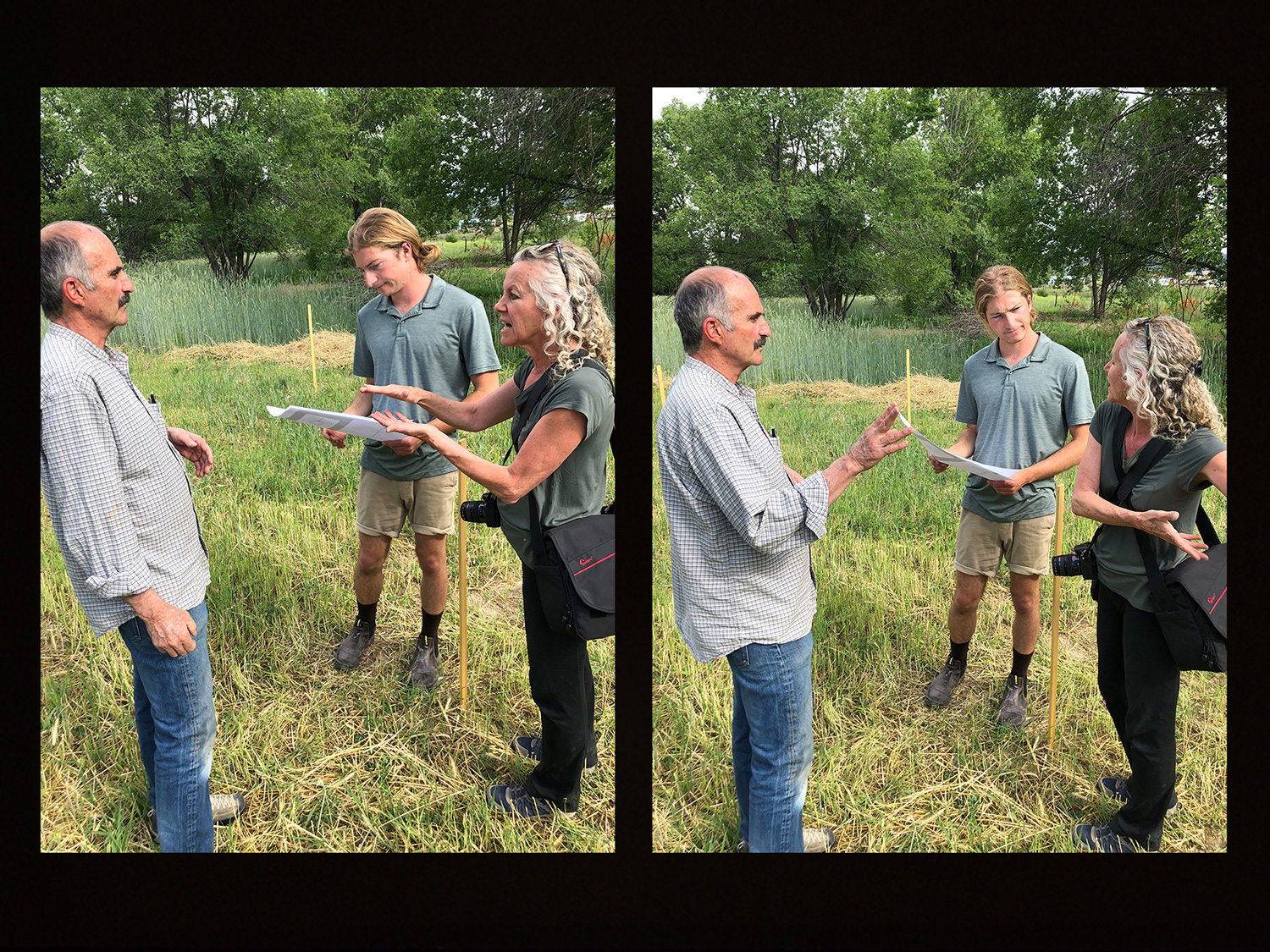 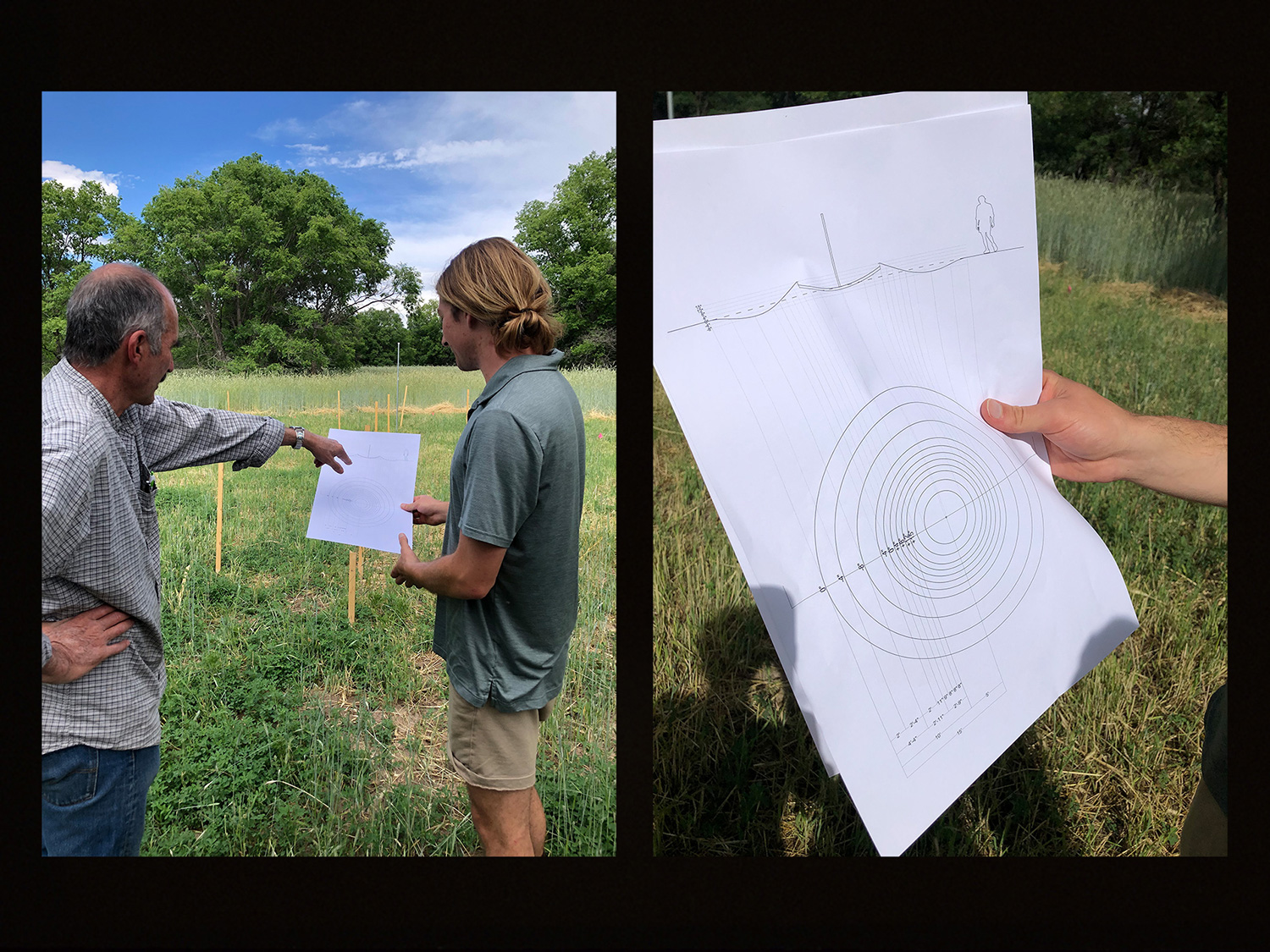 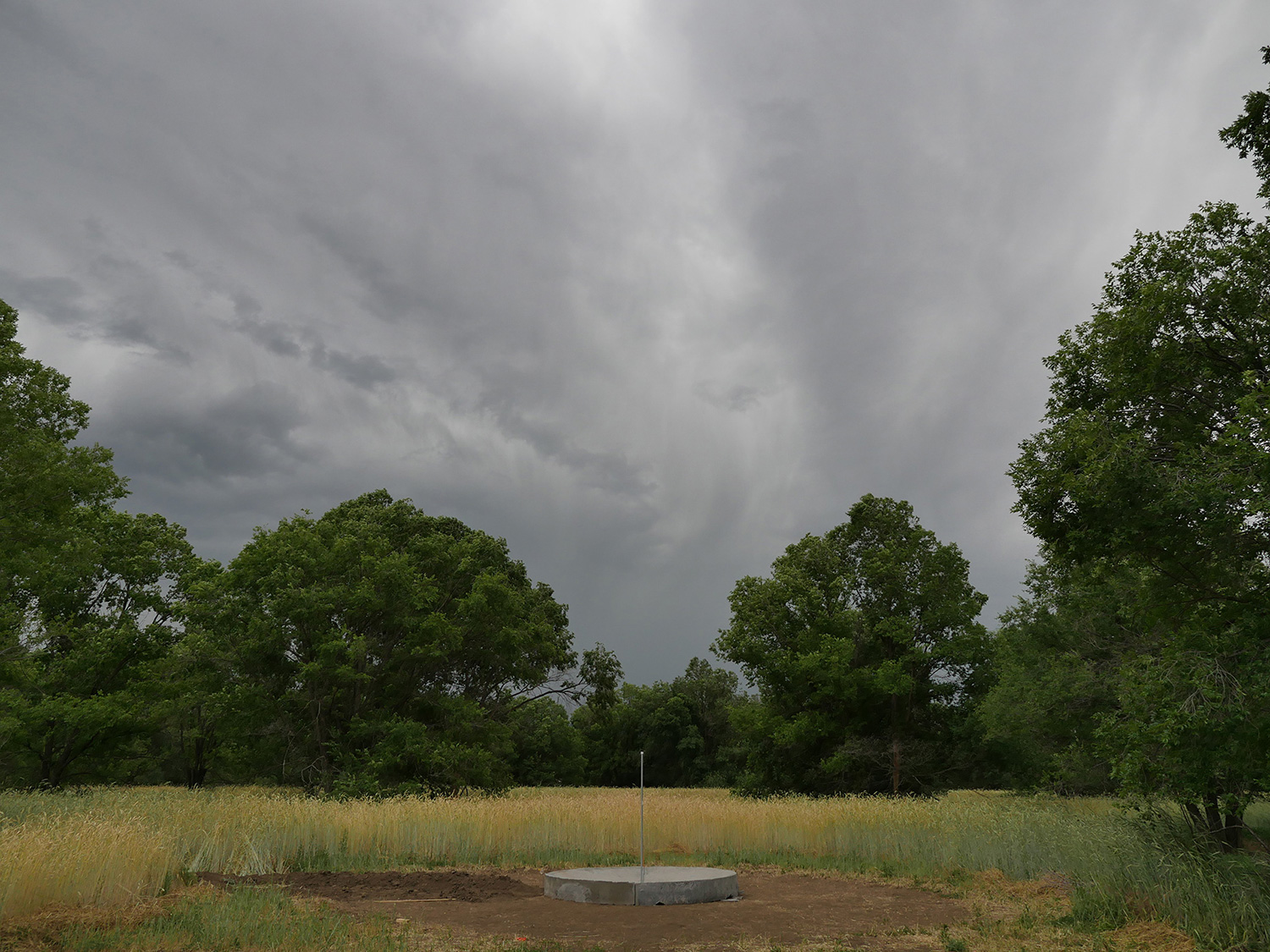 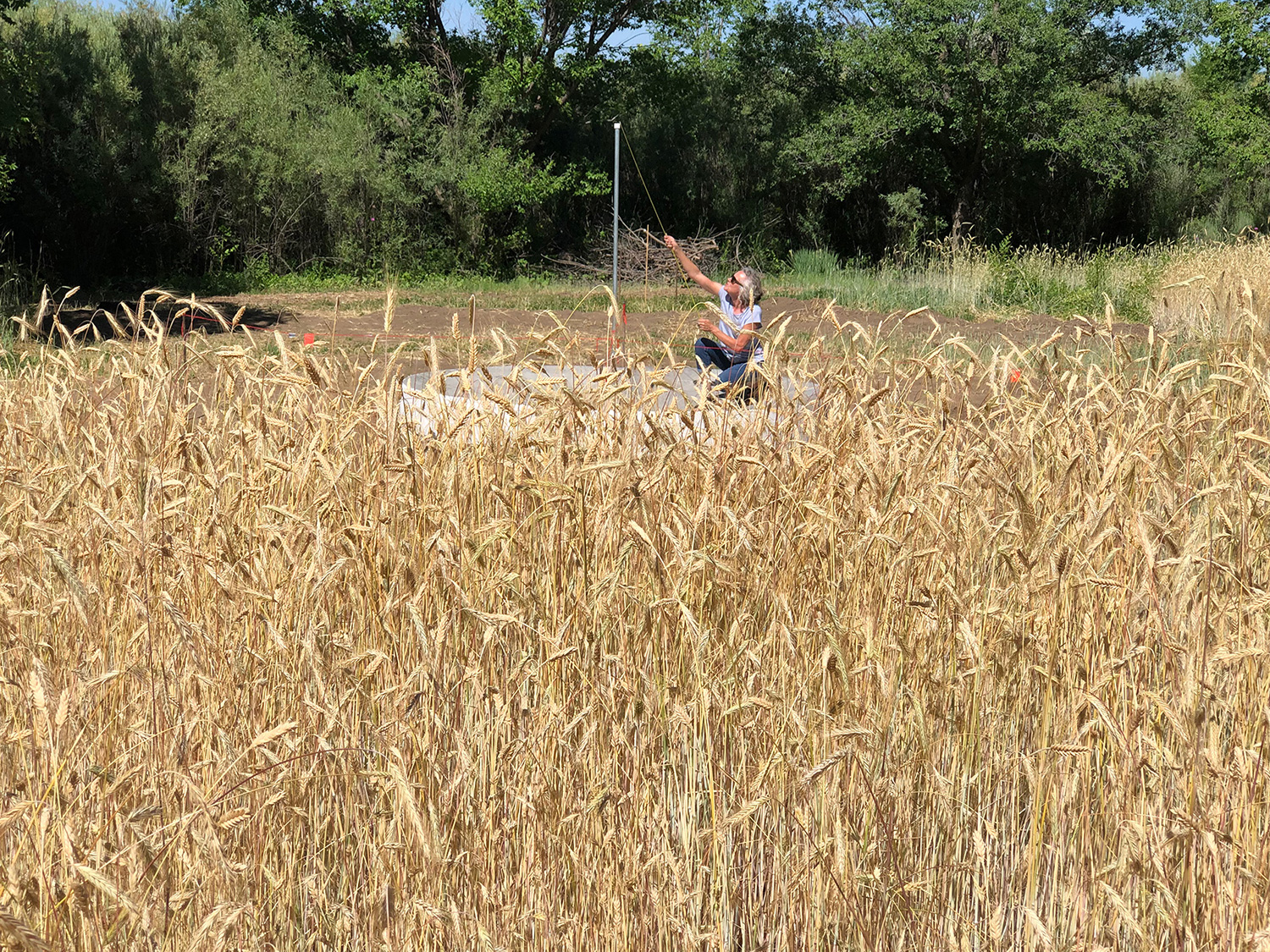 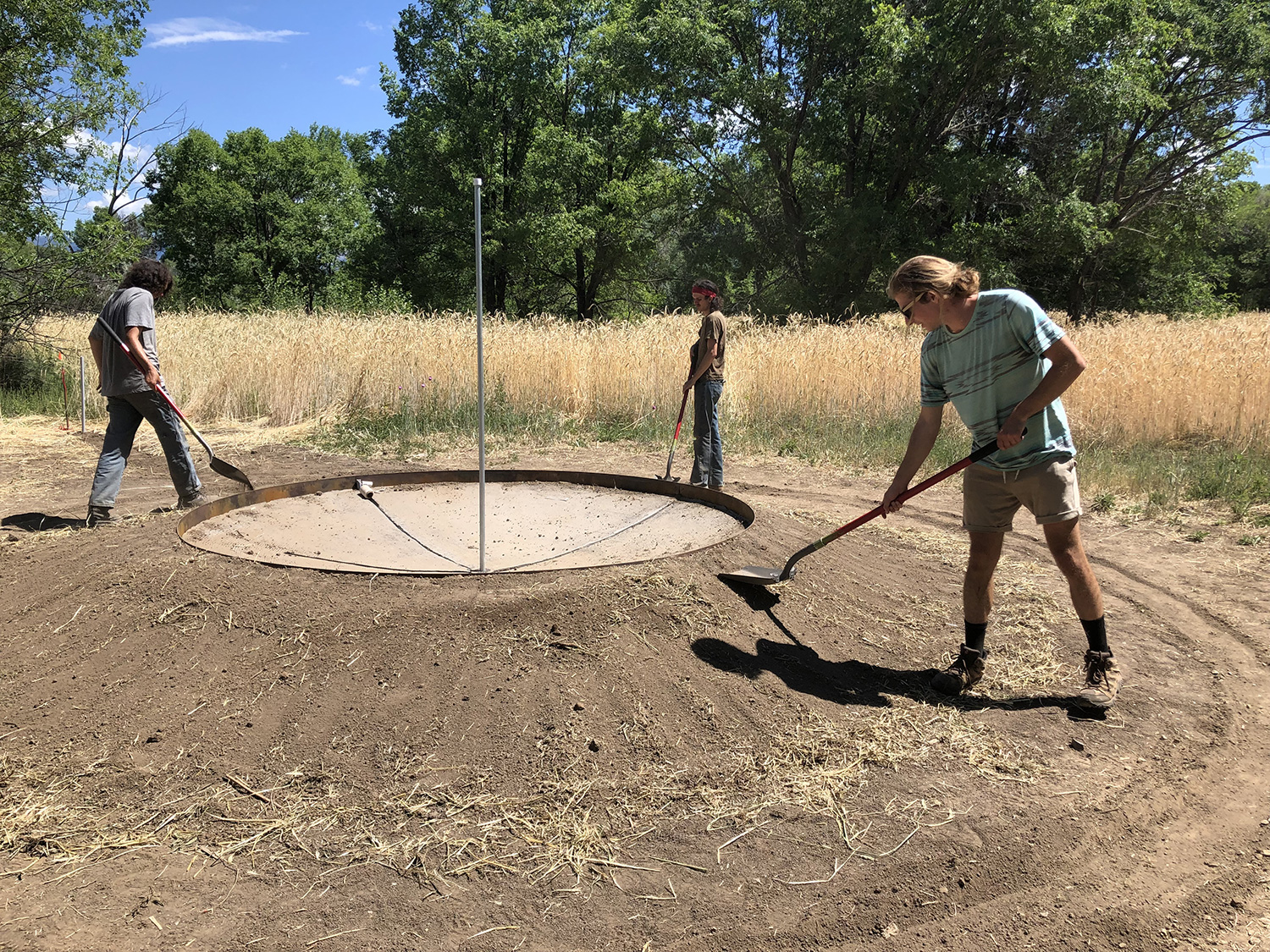 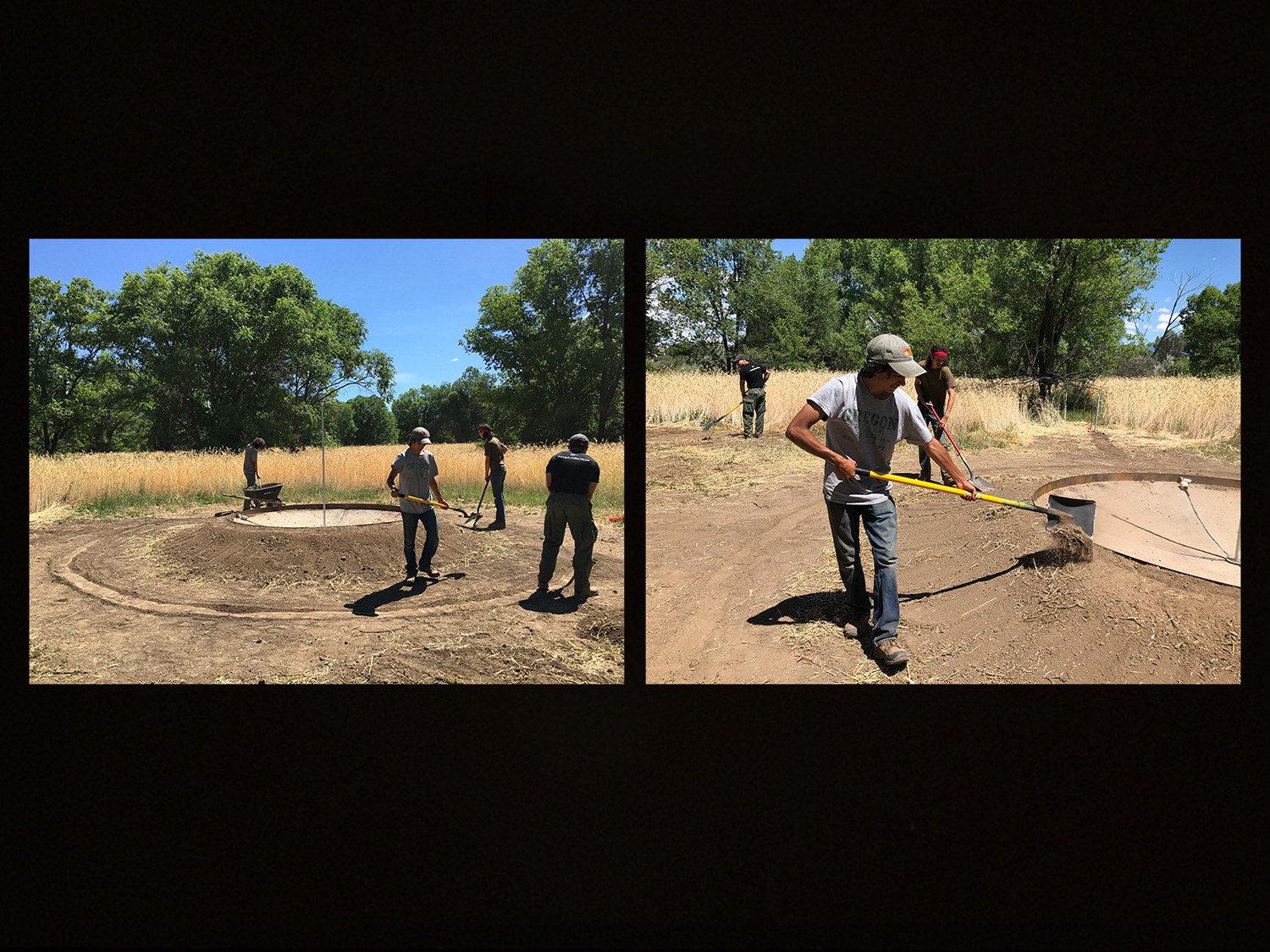 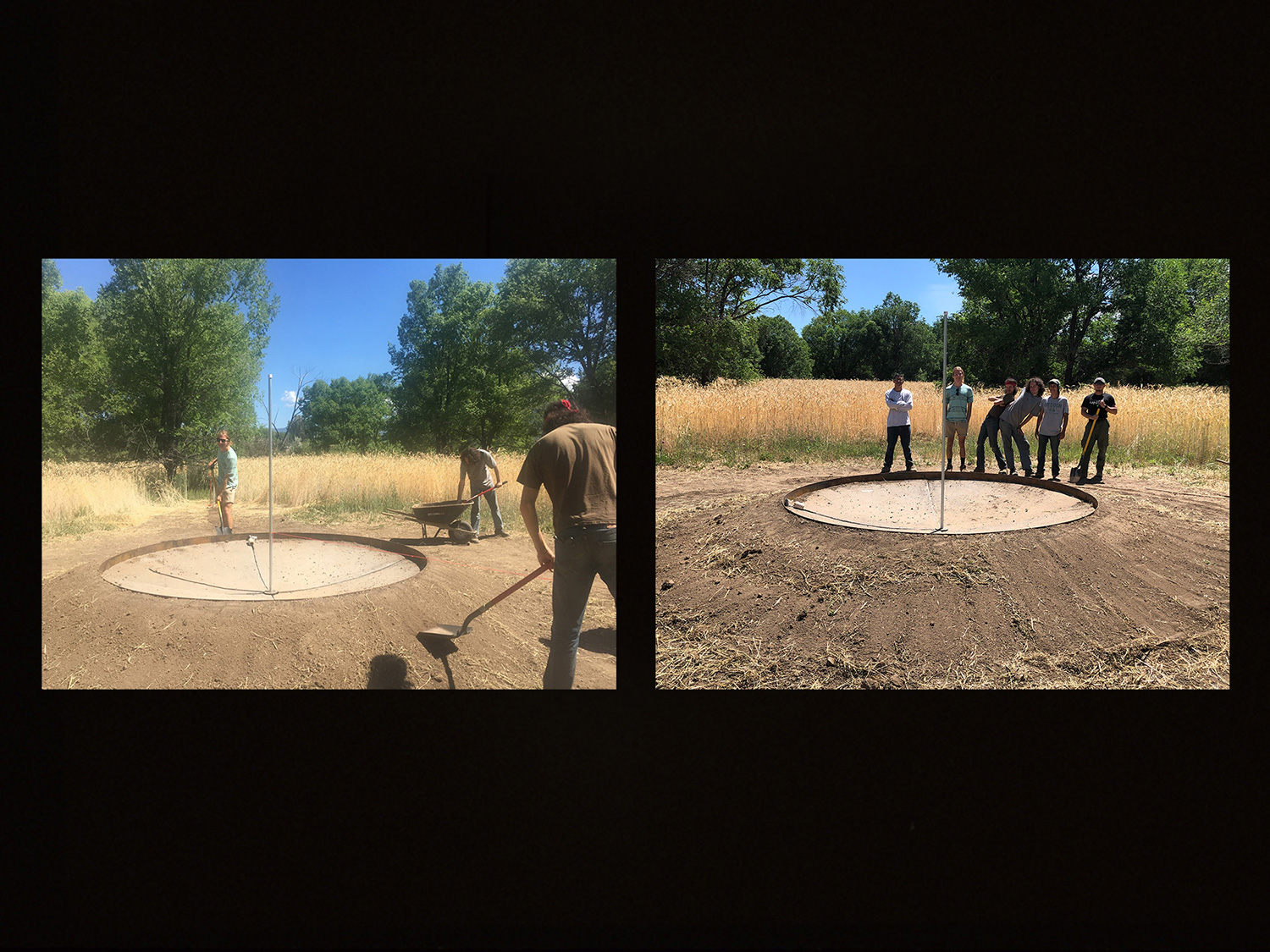 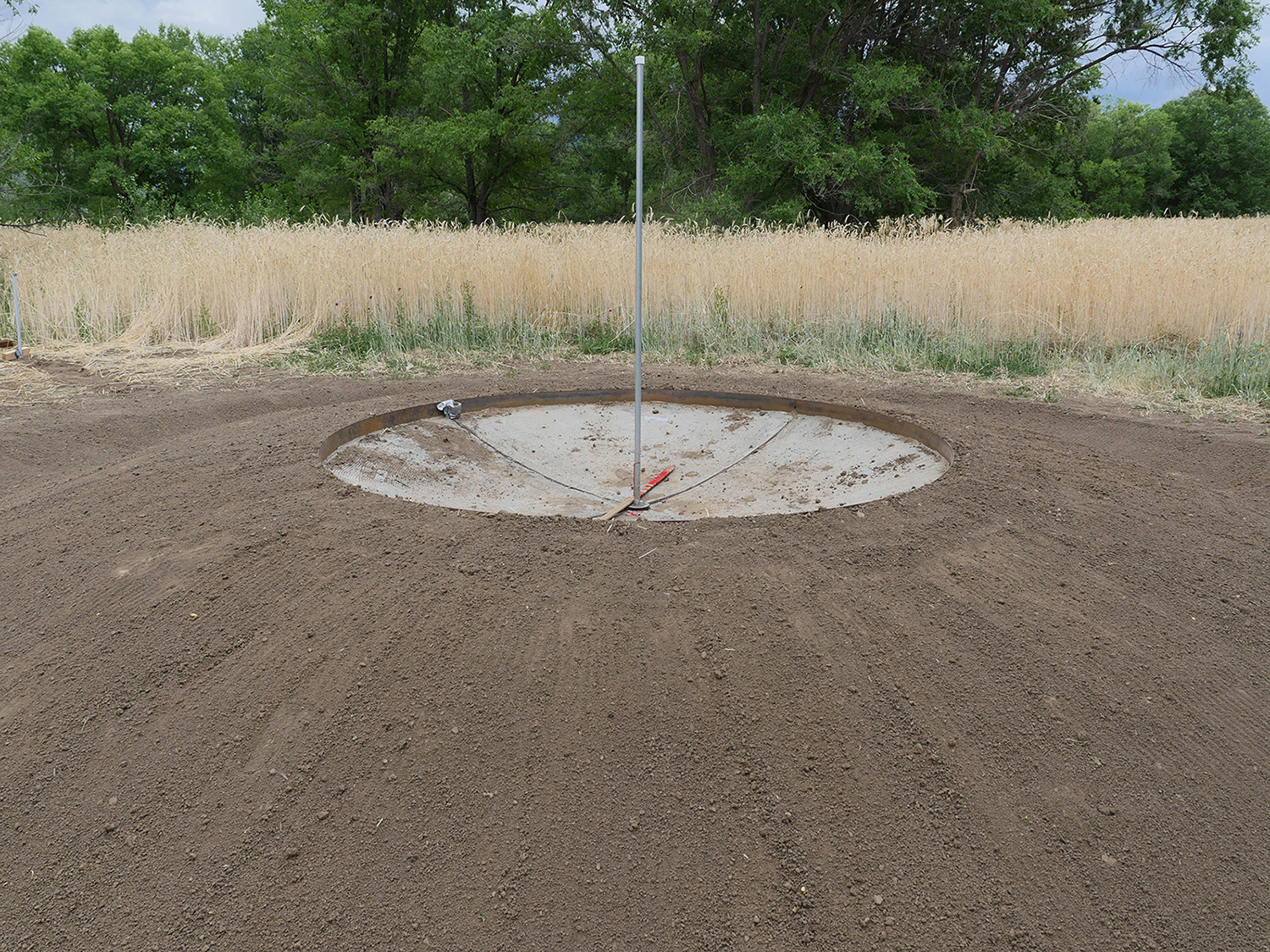 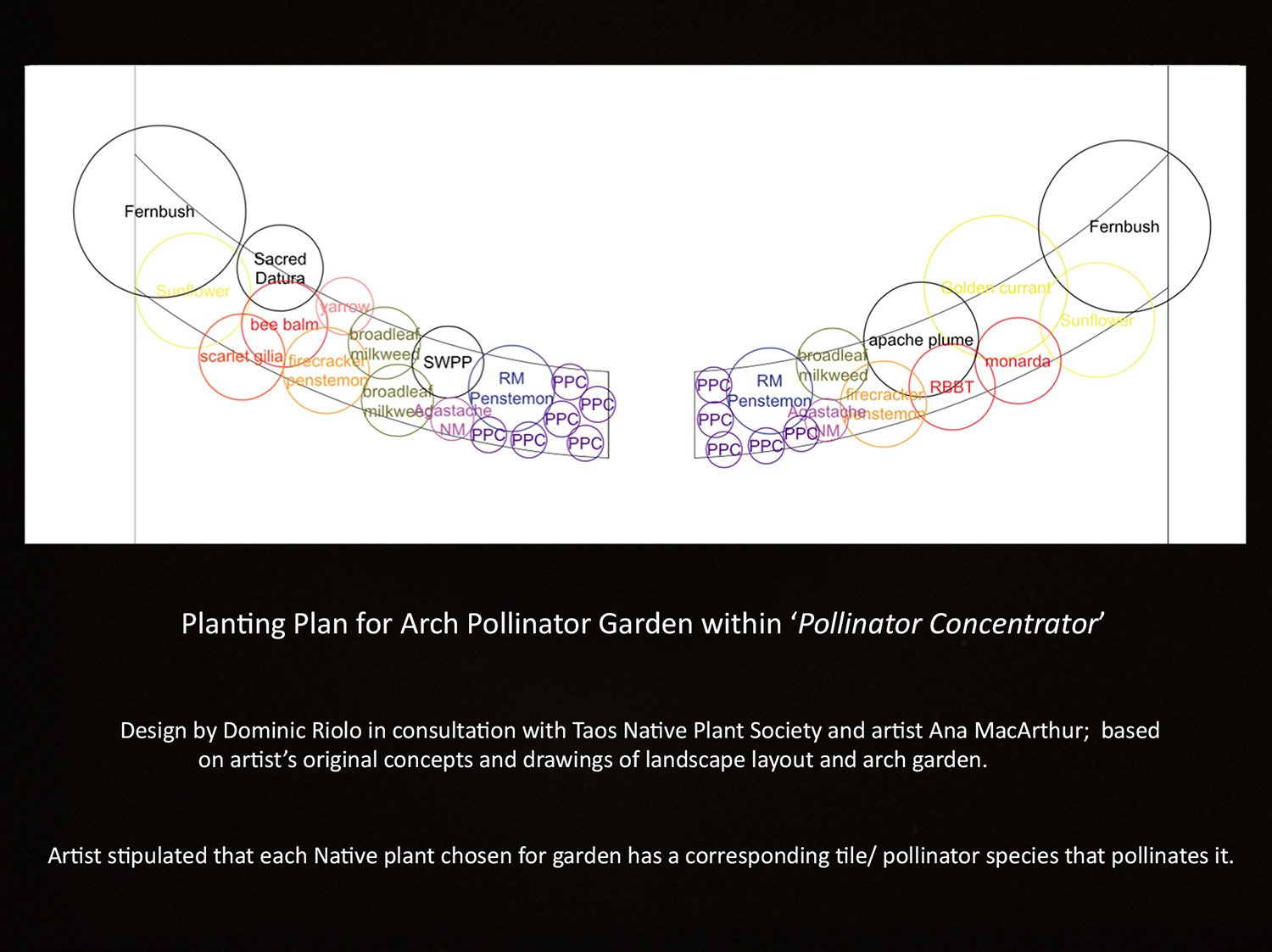 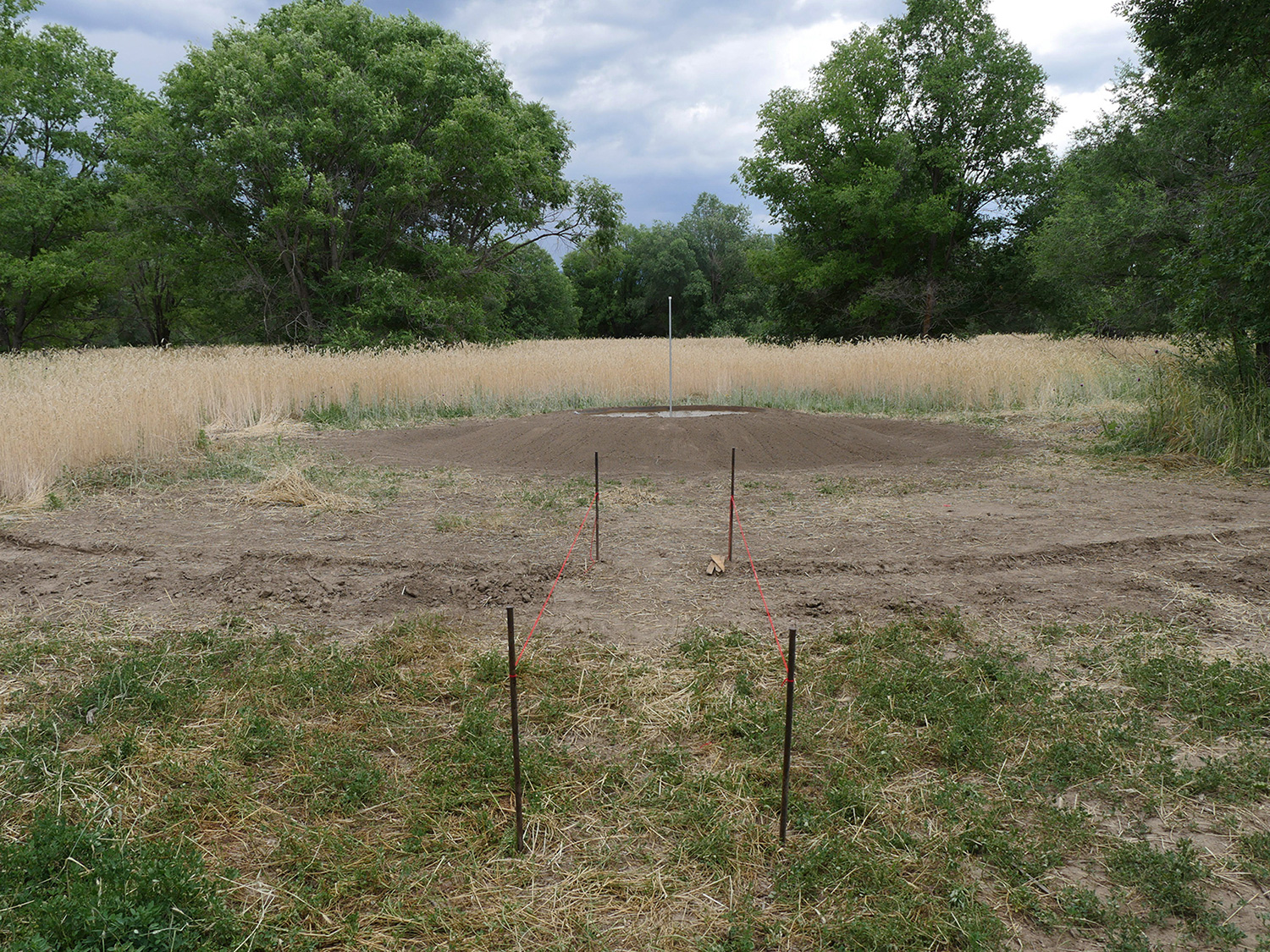 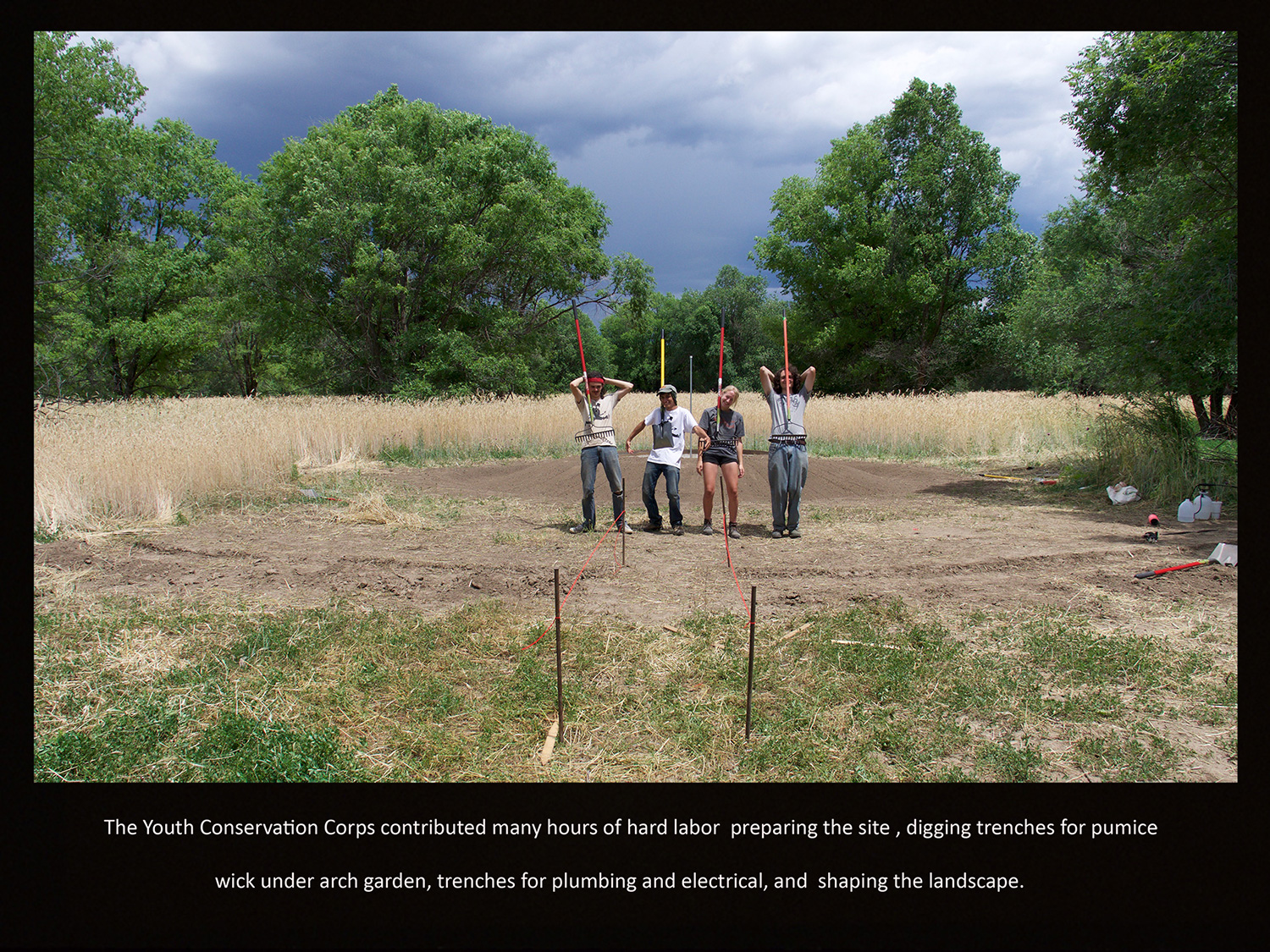 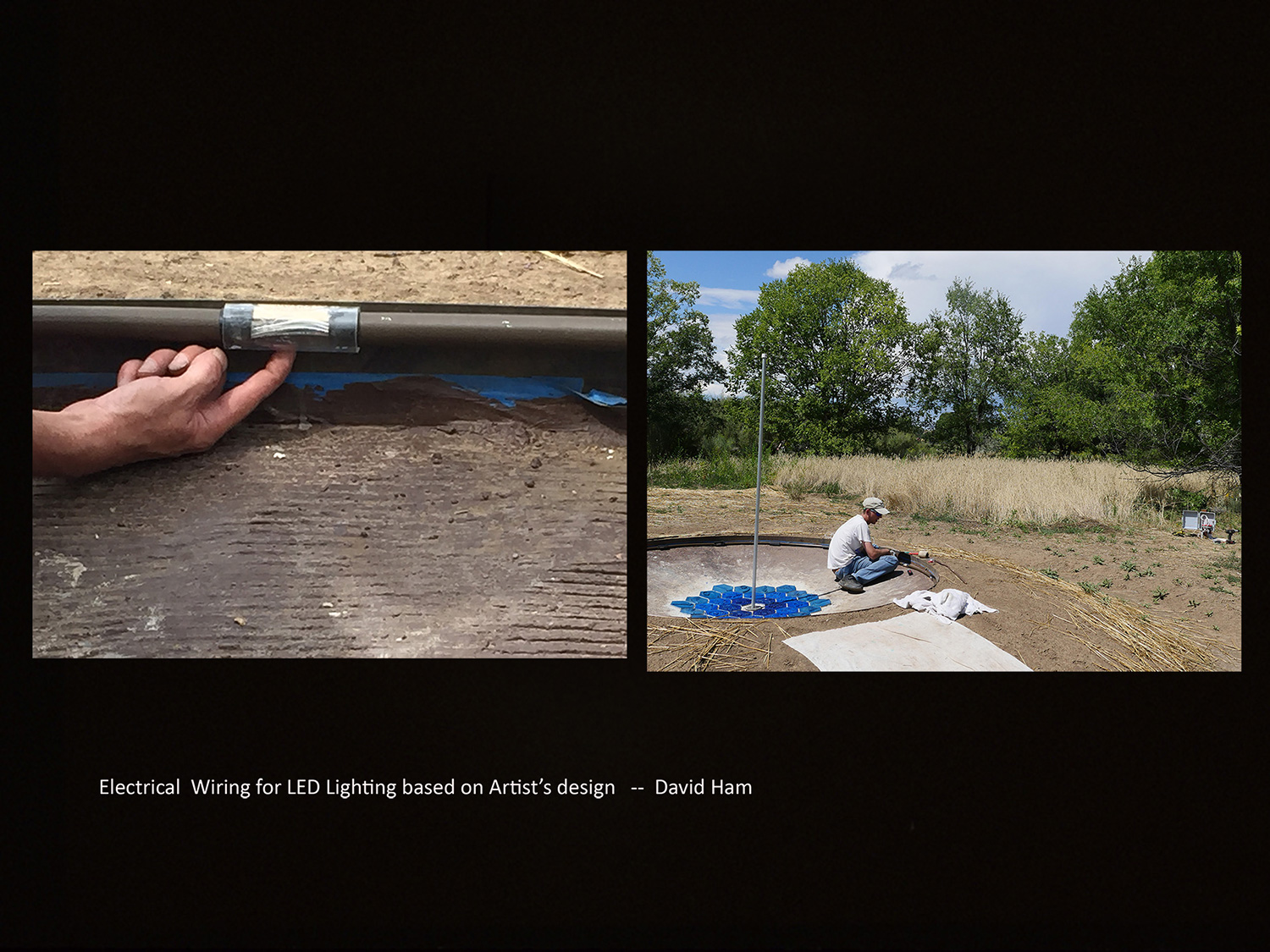 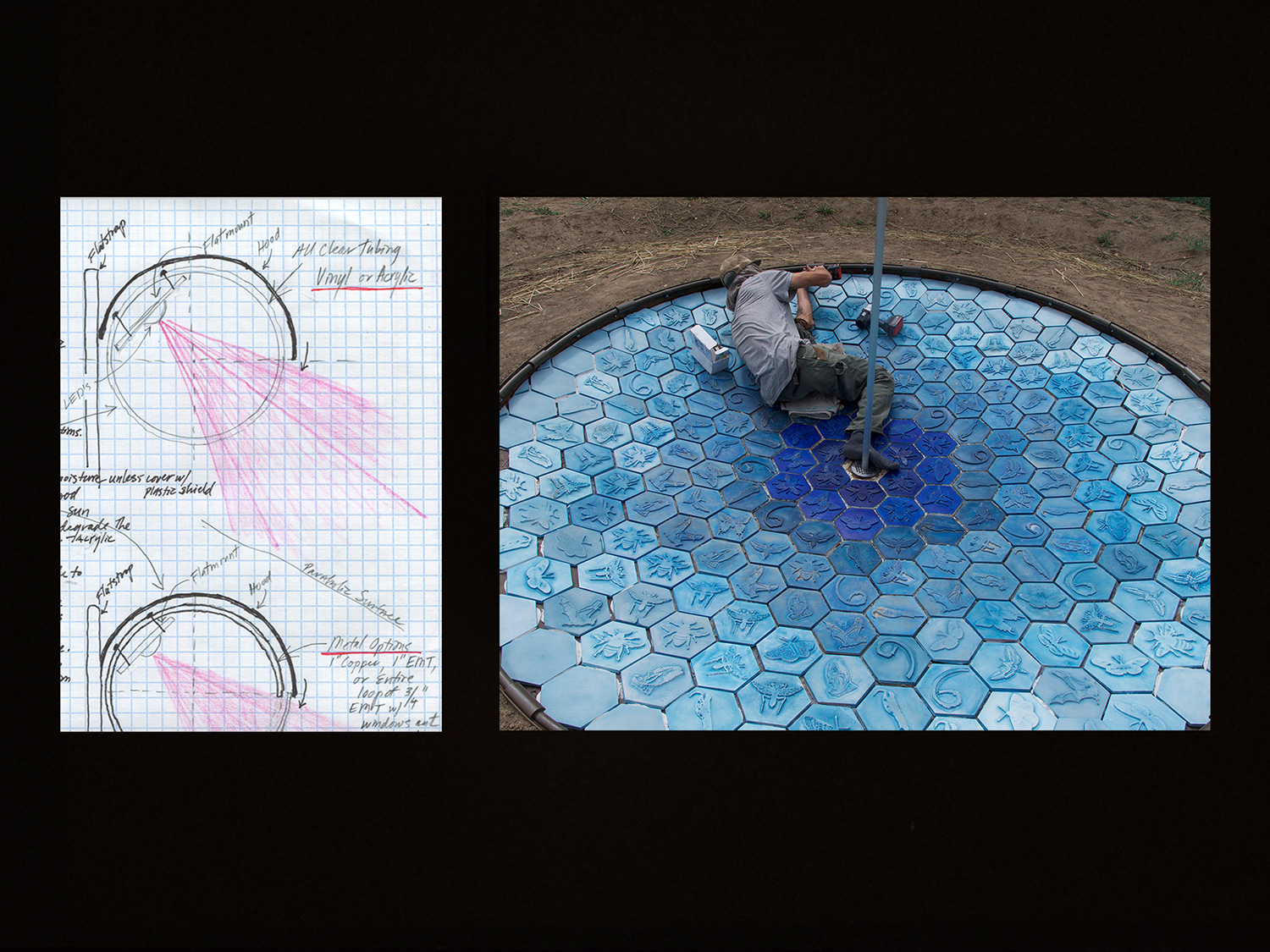 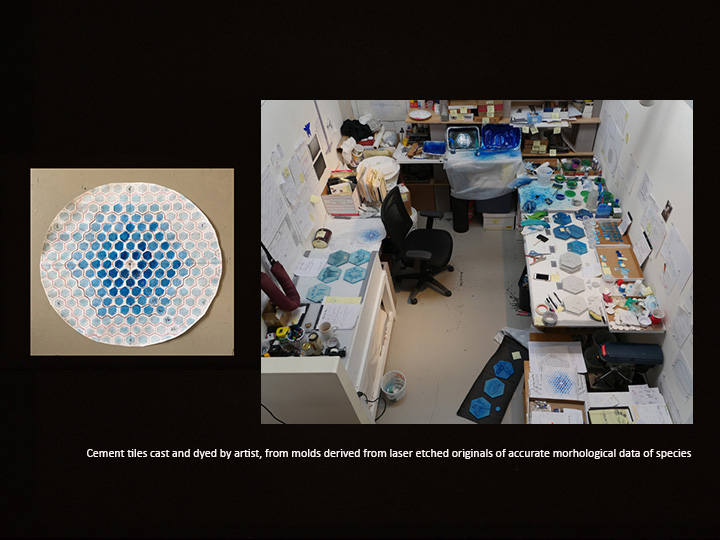 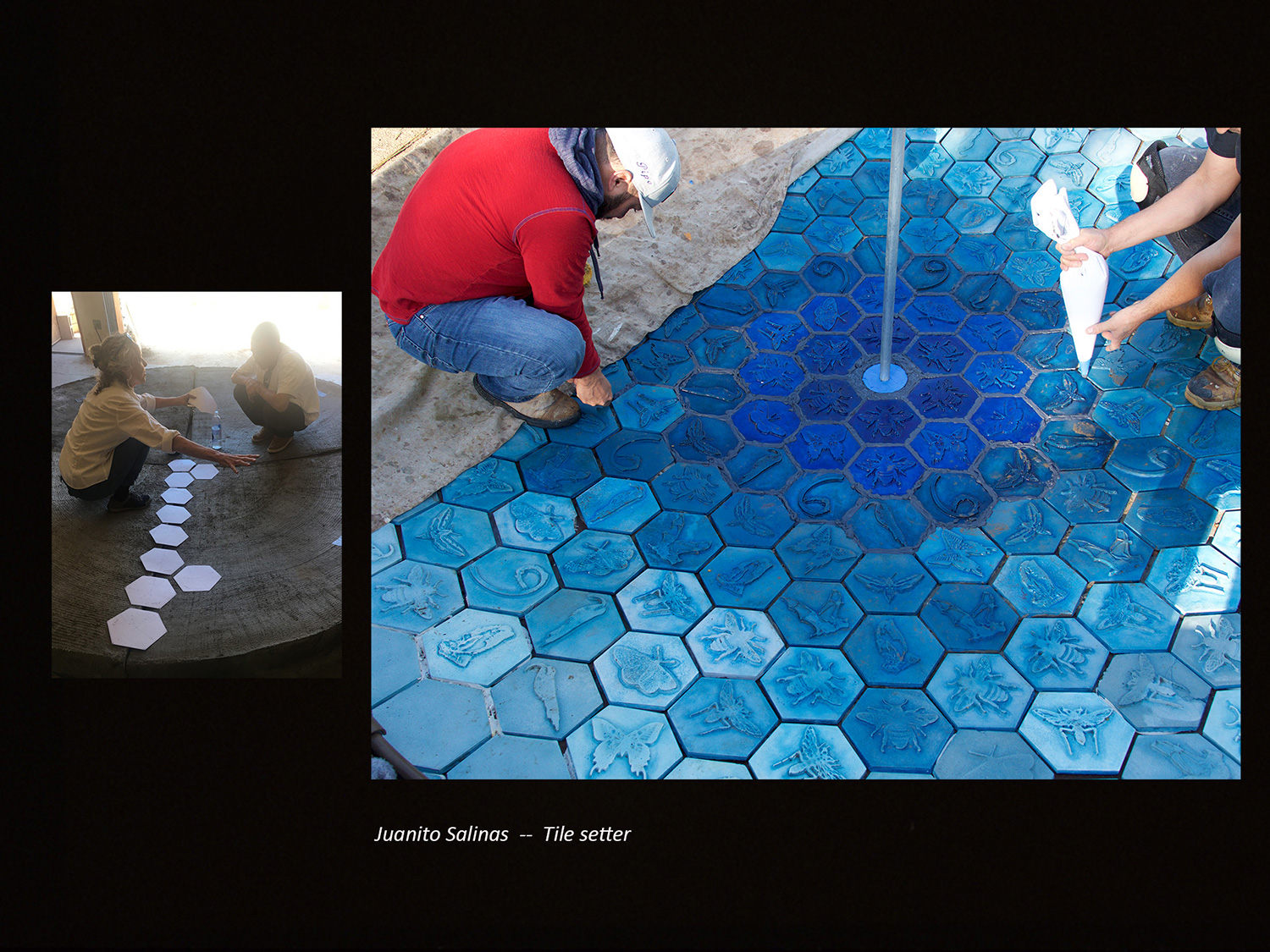 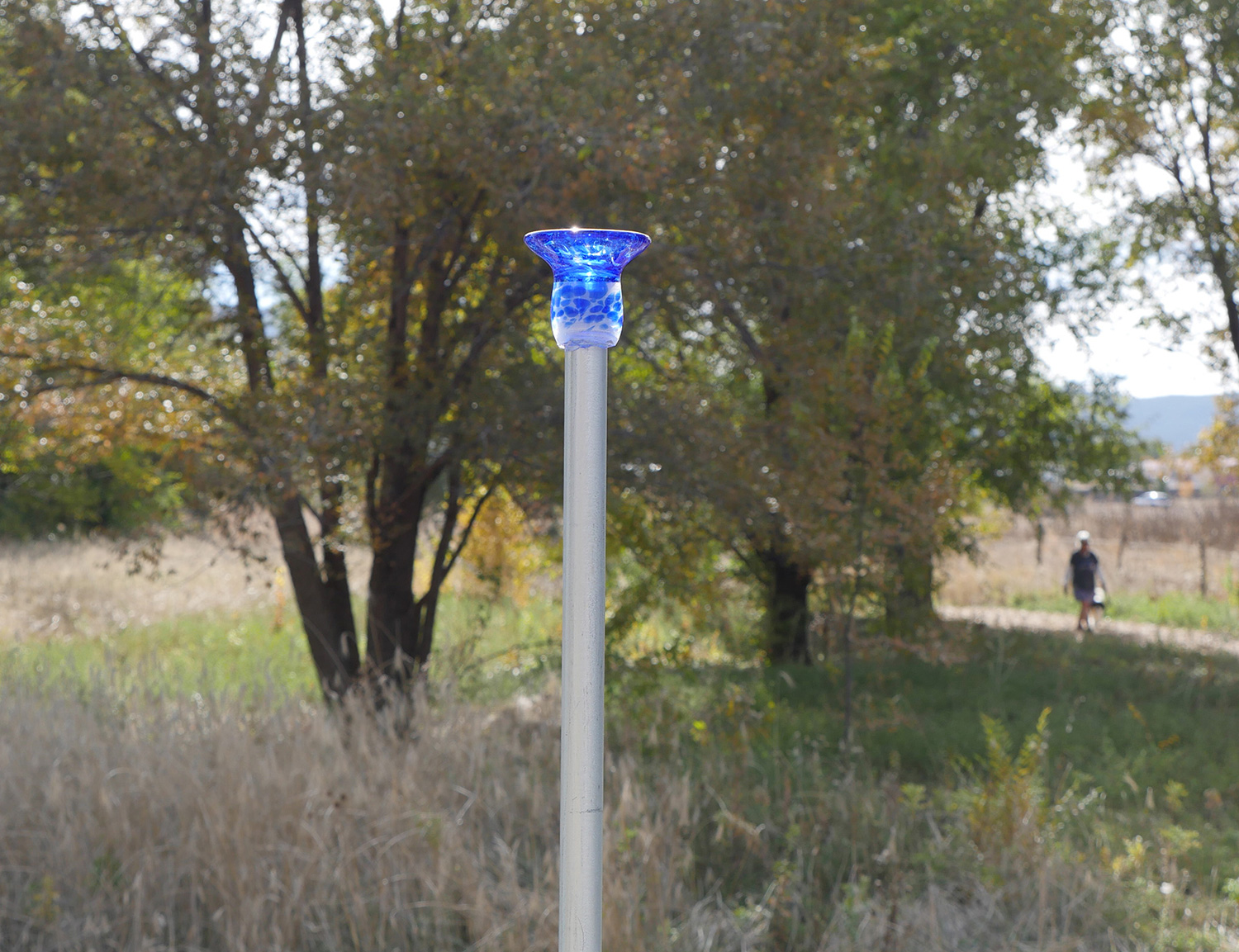 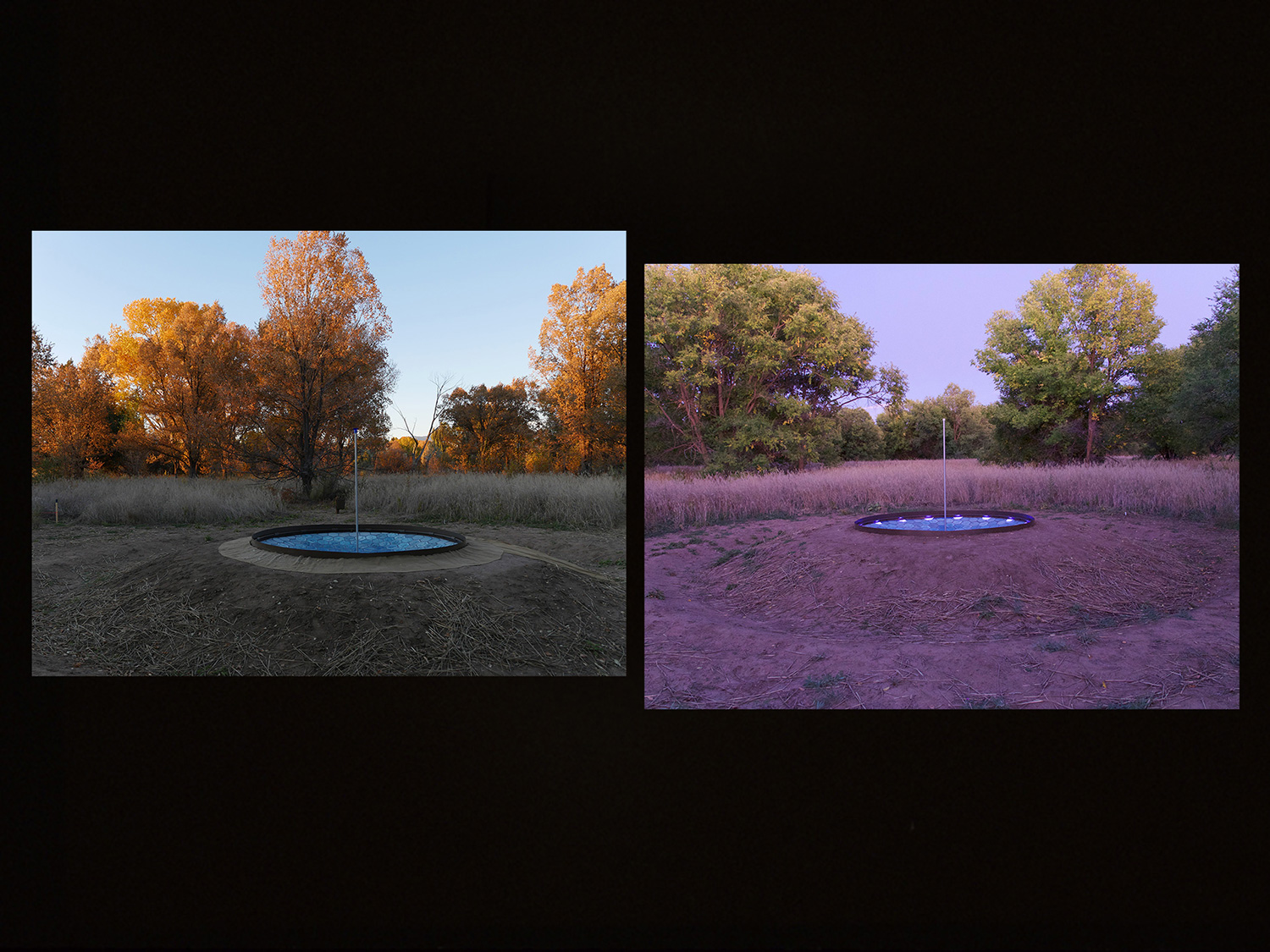 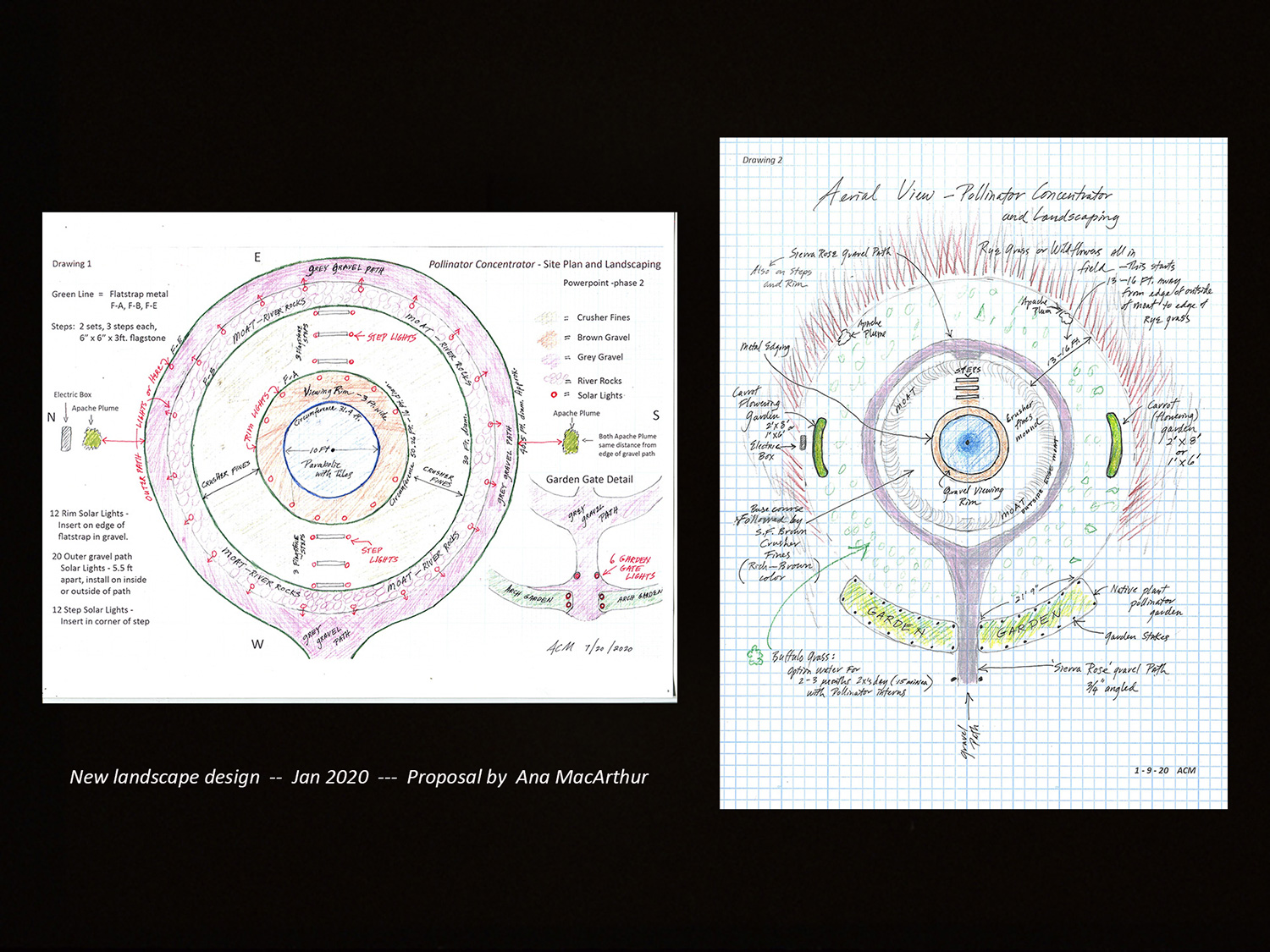 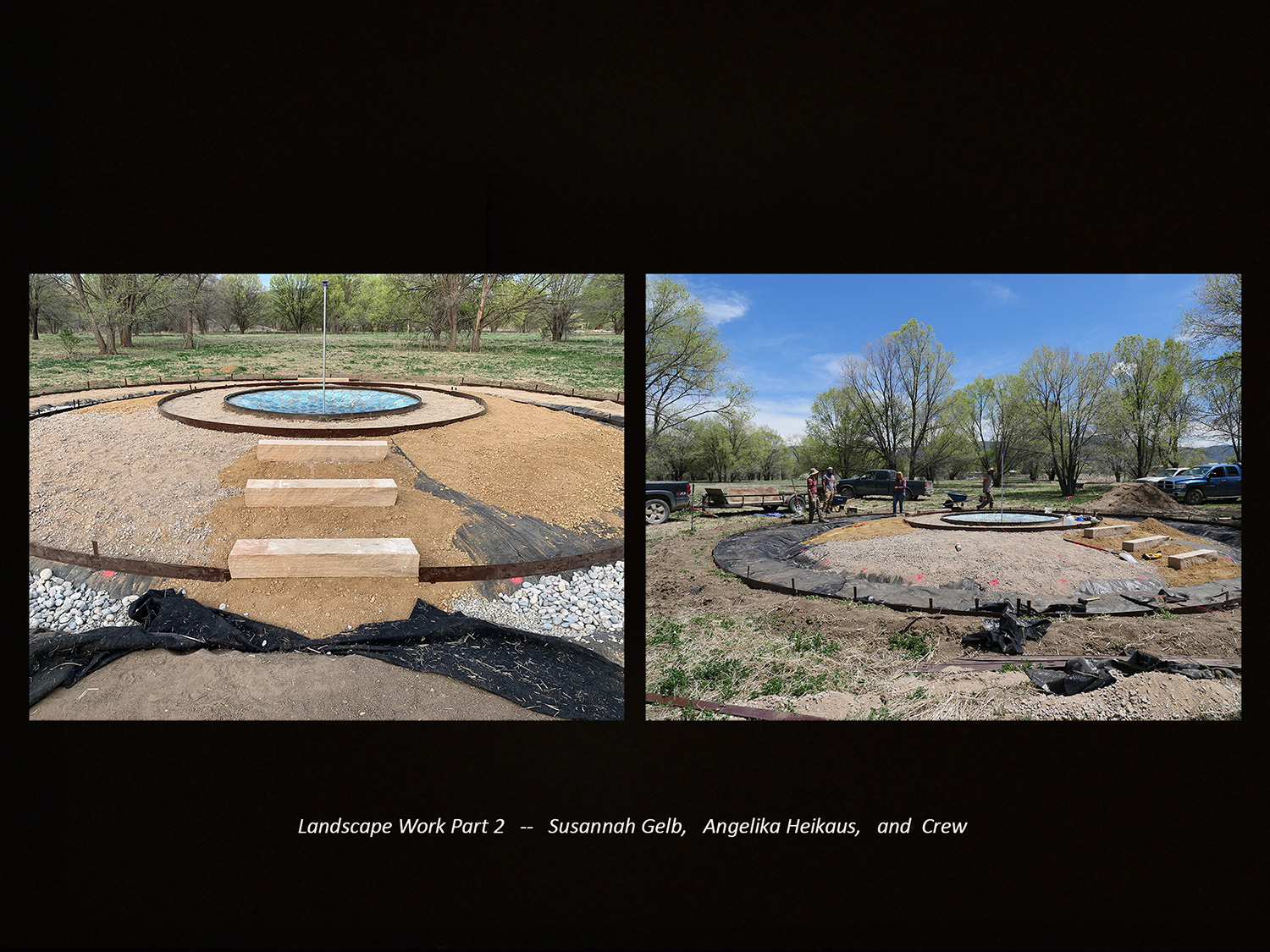 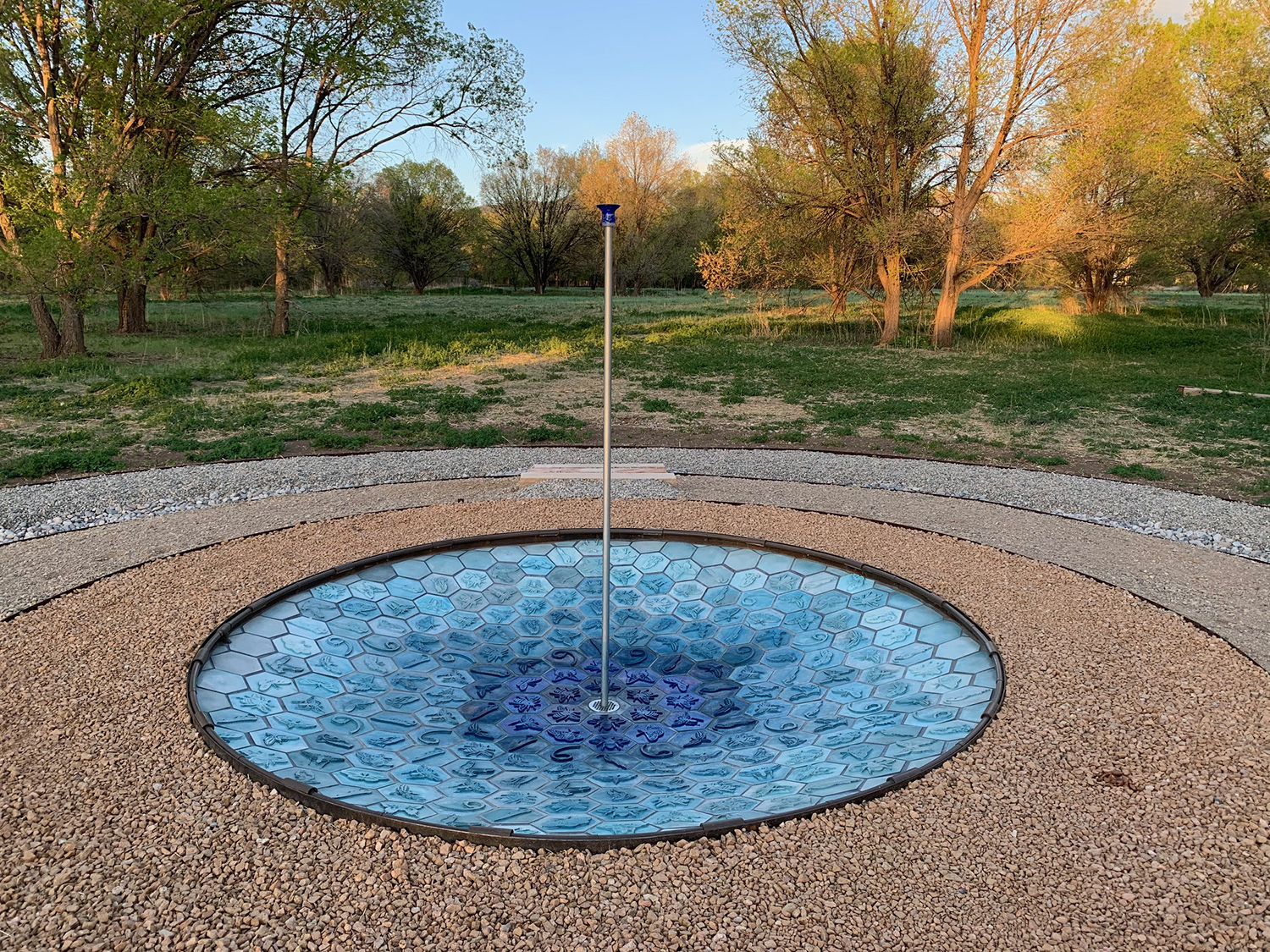 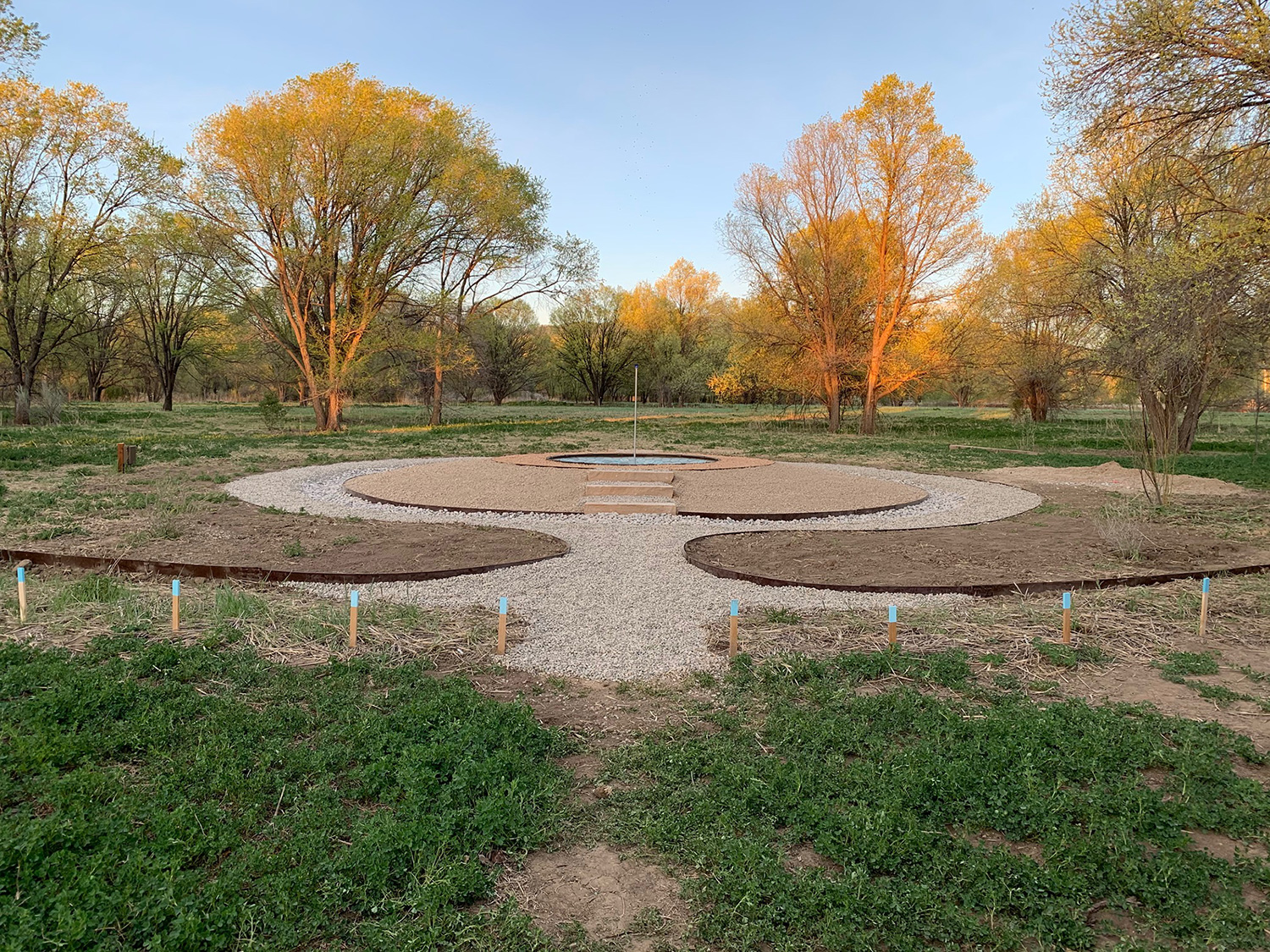 A landscape designer, Dominic Riolo, came to TLT for a summer work-study filling his requirements for his degree at the Harvard GSD in Landscape Design. He approached TLT and then me about collaborating on Pollinator Concentrator as landscape designer. Using my original artistic concept of the appearance of an undulating wavefront of light concentrically generating out of the center pole in parabolic, Riolo elaborated on a beautiful design plan and carried out the earthwork with the help of the Youth Conservation Corp. His concept was to have an entire undulating surface of green and thus planted grass seeds. Due to lack of water in that region of the property the grass could not grow, and Riolo returned to Harvard. At this phase the artist came up with a new landscape concept that defined the shapes with out grass, still had Riolo’s footprint, and made for ease of climbing the mound with steps to the viewing rim for evening events. Taos landscape designers Gelb and Heikaus carried this out. Plantings for an arch native pollinator garden, drawn in my original concepts, were designed in by Riolo, with the help of the Native Plant Society and Ben Wright’s labor. The artist specified that each pollinator species in the tiles needed to have a corresponding plant that it pollinated in the garden. Ben Wright, TLT land manager, planted rye grass in surrounding fields, which will be replaced with an entire field of wildflowers in 2020, guaranteed to draw pollinators.

The hexagon tiles and the overall pattern of tile work were inspired by the ommatidia pattern on a butterfly’s eye. As much as the tile imagery looks simplistic it was derived from exact scientific photos or specimens with the purpose to maintain the exact morphology for identification, study, and memorization through touch. Each pollinator tile species is from New Mexico, with one exception, and with representations from the main pollinator groups, bees, hummingbirds, bats, butterflies, wasps. Particular species were chosen for ease of laser etching original, resulting readability, and ease of casting. Each specific pollinator in tile has a unique story. A blue glass knob at the top of pole is also a small dish to capture water for thirsty pollinators…drinking at the focal point.